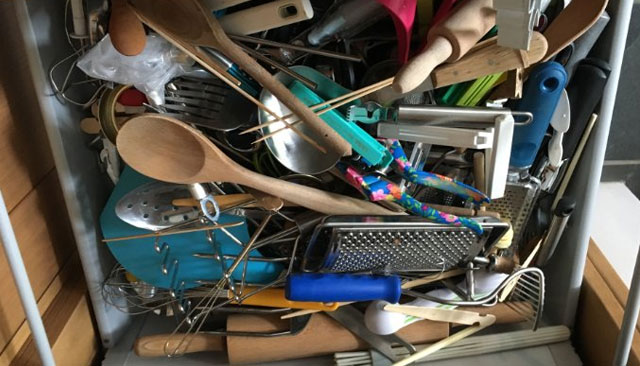 I’m HOLDING on to my 5 WHISKS

In the past couple of weeks I have moved from the leafiest and prettiest of villages up the road 10 miles to the centre of Oxford. For a year, for the adventure, for the love of my daughter, for a dozen different reasons, and what I have been struck by is how much I hold on to stuff; stuff I don’t need, don’t use, don’t like and actually don’t even want in my life. I’m not even a cook, so why do I need a batterie de cuisine which gives me a utensil drawer like this one?

Do I need 5 different whisks for all the subtle nuances of whisking when one will probably do? I usually reach for a fork anyway. Now, I am a serial house mover, I never lived anywhere more than 3 years until I was over 30, and I have moved 5 times in the last 20 years. I thought I was light on physical detritus, loving the clean Scandi thing, hating clutter and ‘junk’, but I was kidding myself. The loft churned out not only boxes of baby clothes to be cooed over anew, but boxes of 20 year old work ‘stuff’ which I had kept ‘just in case’. The loft clearing exercise was more about sorting and re-packing than it was genuine ‘clearing’ because despite many trips to the tip, the charity shop and Gumtree, I had limited time to get packed up and moved, so 50 boxes went back in the loft, but this time, acknowledged and labelled and put on borrowed time, to be disposed of at the next move, promise.

The order of the day (ah, that word order, how neat!) is mindfulness, simplicity and living in the present. Holding onto the past, and trying to control the future, robs us of the simple joys of the now. I have much enjoyed reading Eckhart Tolle’s ‘The Power of Now’ over recent weeks. Rather than trying to change, rather than the striving and inherent self criticism that accompanies wanting to think and feel differently, be different from who I am, I have been ‘noticing’ and ‘observing’ my thoughts and feelings. I have found that by ‘acknowledging’ and ‘labelling’, my thoughts and feelings, much as I have done so very many boxes of stuff has helped me be more self accepting, and has cleared space for the joy and lightness of living in the now.

In my coaching work, change is key, change is a choice, wanting change is why people come to me in the first place. Have you noticed that driving change without self-care becomes another task to do, another shortcoming to deal with, another stick with which to beat ourselves? Am I mindful enough? Am I present? Am I focused? Am I doing this right? How about allowing ourselves to ‘do’ less, and ‘observe’ more?

So, as I unpack and celebrate the excitement of this new phase of my life, I’m not worrying about the boxes and the baggage I haven’t sorted out. I’m keeping all my 5 whisks, and all my unhelpful thoughts, even if I don’t need them, don’t use them, don’t like them and don’t want them in my life, because just by accepting that they’re there, and letting them be, I have strangely been able to let go of them a little, and make the space for the real and joyous simple pleasures of now.